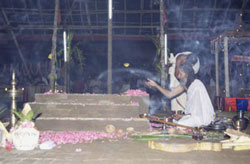 In India it is customary for important events to start with a prayer to Shri Ganesha, as the elephant-faced god is considered the remover of obstacles. At the beginning of Amritavarsham50, the Mata Amritanandamayi Math’s pujaris performed a Ganapati Homa—a Vedic fire sacrifice offered to Shri Ganesha. According to Swami Amritageetananda, one of Amma’s senior disciples, the homa was done “to remove all obstacles and ensure the smooth functioning of the programme.”

Devotees of all nationalities queued up around the four sides of the yagnashala [site of ritualisitc worship] with folded hands as the four priests commenced the yagna.

In keeping with the spirit of Amritavarsham50, there were pujaris from both India and the West performed the worship. The homa was also graced by the presence of the Tendai Buddhist Priest Rev. Takeda Hakusai, representative and senior disciple of Sakai Yuusai Dai-Ajari of Heizan Enryakuji. A senior priest of the Shingon Buddhist sect was also present. The Japanese priests conducted their own homa on 25 September.

Speaking on the significance of Amritavarsham50, the Rev. Takeda said, “In today’s world there are many conflicts and wars, but we must remember that even in the enemy, the same God exists that is in us. Therefore, the need for peace and harmony is very great. I find these same thoughts echoed in Hinduism.”

The homa concluded with the offering of oblations into the fire. Arati, or ceremonial waving of the camphor flame was, performed to the homa kunda [fire pit] and to Amma’s photo.