Facilities: A Tour of the Amritavarsham50 Stadium

A Tour of the Amritavarsham50 Stadium

International Stadium in Cochin was transformed by the Amma’s Ashram for Amritavarsham50, Amma’s 50th Birthday Celebrations for Peace & Harmony. 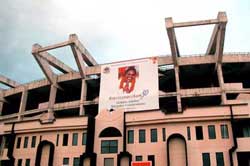 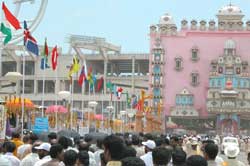 The Ashram literally transformed the stadium,
even erecting a facade of the Amritapuri Ashram temple at its entrance.

A Tour of the Stadium

Devotees entered the stadium grounds through a large archway. As one progressed towards the stadium going down the entrance road, they found various cloakrooms and reception areas ready to help them. Continuing on, one saw all the Amritavarsham50 exhibits: a medical exhibit from AIMS, an exhibit on Amma’s life and mission, an exhibit about Amma’s educational institutions and Colours of Compassion, an art gallery of paintings inspired by Amma. 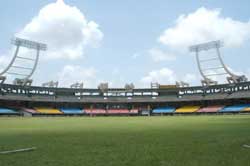 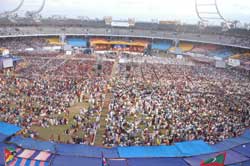 The inside of the stadium just before and during the celebrations

There was also a bank, a travel agency and a post office—all set up specifically for the debotees celebrating Amma’s birthday. Next there was an Indian Canteen and a large area containing the Ashram bookstalls.

Just past Amriteshwari Hall was an Day Care Facility and the Yagnashaala, where the Acharya Vandanam took place.

The entrance to the loop around the stadium was a replica of the front of the temple at Amritapuri. On the right side of the temple facade was a gigantic photograph of Amma, standing with a red garland around Her neck, Her hands raised above Her head in pranam.

On the other side of the facade was a small grassy area covered with cloth -tenting to provide shade.

Moving counterclockwise around the stadium, one might have noticed a small house. It was constructed specifically for Amma to use during the few hours She was able to rest during the four-day celebrations.

Next to Amma’s house was the Media-IT Hub, where international press, media and Ashram reporters worked night and day to bring Amritavarsham50 to the entire world.

The International Canteen was the next building. It, along with electrical and other support facilities, took up most of the right side of the stadium perimeter.

On the far side of the stadium was the Indian Canteen, snack shops and covered dining area. This is where most of the 100,000-plus devotees took their meals—given for free as Amma’s prasad by the Ashram.

Finally, just before coming back to the temple facade entrance, one came across the Western Café, where devotees could buy pizza, veggie burgers and other snacks from the West.

Of course the centre of the stadium held the real treat. This was where the huge stage was erected for Amma to give satsang, sing bhajans and give darshan upon. The stage was set up with two side wings, so the many cultural groups from around the world could perform for Amma as She continued to give darshan.