Only the promise of Amma’s sweet embrace could have kept the thousands of people in line for darshan from rushing to get a better look at the spectacular cultural performances taking place onstage. Featuring performances by a group of artists as diverse as world-renowned flautist Hariprasad Chaurasia, American rock star J. Mascis and a Rajasthani singer with the bragging rights to “the world’s longest moustache,” it was definitely a night to remember.

Throughout, as Amma gave darshan, She frequently would turn Her head to take in the movements of a dancer, to smile at a musician or to pop a laddu [sweat ball] into a performer’s mouth.

Flautist Hariprasad Chaurasia was the first to perform for Amma.

The night began with Chaurasia’s haunting flute. Chaurasia is a master of the bansuri, the flute played by Sri Krishna. Soothed into cerebral mood by his performance, everyone was next treated to dances by four of Kerala’s leading film stars: Divya Unni, Kavya Madhavan, Suja Karthik and Devi Chandana. They danced to bhajans sung in the Ashram, including “Sata Koti Vandanam,” “Vagadheeswari” and “Vraj Me Aisa.” 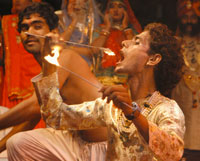 One of the most memorable performances of the evening was by a troupe from Rajasthan. The party featured dancing ladies who locked hands and passionately whirled each other in circles. If that wasn’t fiery enough, they also danced with pots containing burning flames on their heads. The height of the troupe’s show found a young man swallowing fire and dancing around the stage while balancing pots atop his head.

Even while balancing six such vessels, he never failed to keep moving to the rhythm or to make various gestures and facial expressions. It reminded one of Amma’s oft-repeated advice about how amidst all life’s distractions we should still strive to keep our mind firmly focused on God. He even danced over to Amma at one point where She hand-fed him laddu prasad. 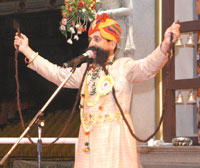 As talented as the pot-dancer was, the show was clearly stolen when one of the troupe’s singers proudly unfurled what, according to the Guinness Book of World’s Records, was the world’s longest moustache (he had about six feet on each side tucked up over his ears and into his turban!). When he went up for darshan, Amma asked to see it once again, to which he happily consented.

It was a tough act to follow for the International Bhajan group, which featured Amma’s devotees from mainly Europe and American joining together for a rocking set that featured electric guitars, bass, a trap-drum set, saxophone, cello, keyboards and harmonium. All the devotees were professional musicians, including American rock star J. Mascis, who was the frontman for the rock group Dinosaur Jr. Amma gave Her children a big smile and clapped loudly at the end of their set, which found the musicians rocking out to “Help Me, Amma” and “Jai Jagadambe Durge Ma.”

At 5:00 in the morning Amma was still giving darshan. It seemed there was just not enough time in the day to finish the massive queue. It was then that Amma had an announcement made: “Would all of Amma’s children who have not had darshan yet, please come back tomorrow with the same tokens? You will be given priority in tomorrow’s line.”

Amma’s unhappiness in having to make this announcement was obvious. Chiding Herself for having made all those children wait for so long just to turn them away in the end, She asked for the microphone and spoke into it Herself, “If you are feeling very sad or distressed, you may still come to Amma for darshan. Amma has simply run out of time today, having set a meeting with the President of India for 8:30 tomorrow morning. That is why I am asking you to come back tomorrow.”