A single white lotus in the midst of a garland of tender rosebuds—that was Amma sitting in the centre of a group of children that gathered around Her as soon as She sat down to witness the evening’s cultural programmes. In a preamble to an enchanting night of darshan, Amma called more and more of Her young ones to sit at Her side and talk with Her. 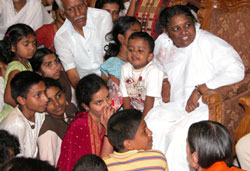 Amma and kids: a white lotus surrounded by rosebuds.

Thus it was that little Appu got to show Amma his impression of Her—Kali Amma— eyes rolled up and tongue sticking out. And how Amritesh, a fair-haired cherub from Finland, got to look up and stare in wonder at the face doting on him. The older children draped themselves around Amma’s sides, trying to get in a word whenever they could.

Thousands upon thousands lined the stadium grounds, the queue for darshan snaking out and along the street encircling the stadium. Amma’s priority that night was to give darshan to people who had come to be with Her from faraway places of India—travelling perhaps days—on a resolute pilgrimage to be with their Mother on this momentous occasion. 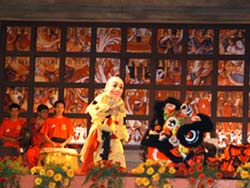 The Lion Dance presented by devotees from Malaysia

Just five minutes into the darshan and Amma’s pure white sari was already stained with tears. So many were breaking down as Amma drew them into Her embrace. The crowds exceeded every expectation, yet Amma still found time to lovingly ask after the welfare of Her children: “Where are you coming from, son?” or “Daughter, did you eat dinner?” or “Are you being taken care of? Do you have a place to sleep?” Amma filled many longing hearts as She popped little laddus [sweets] into some mouths, playfully tweaked ears and joked around with others.

A touching scene unfolded as a group of deaf-mute children came for darshan. Amma held each one close, looked deep into their eyes and greeted them, “Om Na-mah Shi-va-ya,” mouthing the words distinctly so that the children would comprehend. Each child greeted Her back, “Om Namah Shivaya.” The words they formed may have been indistinct, but as each of them embraced this unexpected privilege, their faces instantly lit up.

Violinist L. Subramanian and his wife, Kavitha (not pictured), performed for Amma.

As the night drew into early morning, artists performed on either side of the massive stage—a violin recital by Dr. L. Subramaniam and bhajans by his wife, Kavitha Krishnamurty, soothed the audience. A dance troupe from Malaysia thrilled everyone with their performance of the Chinese Lion Dance. And thiruvathirakkali, a dance-form native to Kerala, compiled graceful flowing movements to a song glorifying Amma’s birth. Throughout, Amma blessed the artists with loving glances and smiles.

Many thousands of hugs later—including one to a seriously ill child borne on a stretcher—Amma got up. It was 4:00 in the morning, yet She was not done. Looking down, She noticed some people pressing against the enclosures and She asked them what the matter was. They replied in one voice: “We want darshan, Amma!” They had apparently waited for hours in anticipation of darshan, but could not get into the line. “Amma, it is enough if you could only walk by us,” some of them implored.

What was a mother to do in the face of such sincerity? Touched, Amma immediately sat down again, and continued to give darshan. Only after all were taken care of, did She leave, Her arms still outstretched, touching and caressing as many as She could as She walked by.

A two-hour break now, perhaps—time, after all, is unbending—and Amma would be all set to go again, to welcome the next day and the prospect of wiping the tears of thousands more.