Kartikeyan Madhurasam and his team of 25 worked day and night making garlands—for the stage, for Amma’s photos, for VIPs… for wherever they were needed. 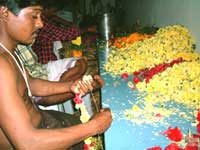 For the Amritavarsham50 Celebrations, devotee Kartikeyan and his team made 5,000 feet of maalas a day

Throughout Amritavarsham50, the floor was covered with great mounds of flowers: golden marigolds, yellow chrysanthemums, elaborate red blooms called chicken flowers, and white jasmine. Needless to say, the room smelled heavenly. The flowers came from Tamil Nadu by the truckload and were transformed into the most beautiful maalas, some thick, some thin.

Kartikeyan’s team took turns, resting for a couple of hours and then starting again. Each day, they reckon that they made about 5,000 feet of maalas. The speed at which they worked—holding the flowers in their left hands and deftly tying them together with their right—was astonishing.

Kartikeyan and his team first met Amma in 2002 in Amritapuri. They are from a small town near Coimbatore. Kartikeyan started making maalas when he was 10 years old and has been doing it for 22 years. It was clearly a joyful experience for him and his colleagues to do this service for Amma throughout Amritavarsham50.