One of the biggest challenges for the Ashram was in making sure the venue was fully operational in time for the mega-event. Truly the accomplishment of this epic task was only possible through Amma’s grace. Not only did the stadium needed a facelift, but the Ashram also had to correct long-lasting problems in terms of the facility’s basic amenities: namely water, electricity and sewerage. 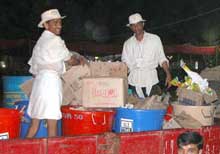 Trash and foodwaste was removed in an eco-friendly fashion

The stadium’s main power-supply room had to be fully over hauled. In the end, it was running at a higher standard than even when the stadium was new. To ensure adequate and uninterrupted supply of electricity, the Ashram had to arrange power connections from six different grids. Although it would have been next to impossible for all six grids to fail simultaneously, a backup diesel generator was silently sitting on standby throughout the four-day celebrations.

Cooking, washing and drinking—without adequate water, none of it is possible. The stadium’s normal water pipeline provided only a fraction of the requirement. Hence the Ashram had to arrange the laying of an additional 1.8 km pipeline to draw from Cochin’s main water supply. 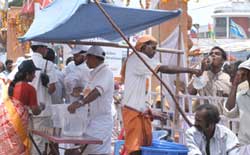 Before the Ashram moved in, the stadium’s bore-well pump took five days to fill the overhead tanks. The Ashram changed the pump, so that what took five days, only took five hours. A second neighbouring bore well also was equipped.

But quantity was not the Ashram’s only concern. The water also had to be safe. To ensure the water supply’s quality, the Ashram fitted a water-purification system with a capacity of filtering 15,000 liters per hour. The filtered water was then regularly tested by chemists from AIMS, Amma’s super-specialty hospital.

Amma’s brigade also completely cleaned the stadium’s sewerage and wastewater system, draining and clearing the choked lines so it could once again reach the treatment plant.

The Ashram also equipped the grounds around the stadium with 250 portable toilets. Pump trucks serviced the toilets four times a day, and EM (effective microbes) were be added to gutters to eliminate odour.

The Ashram also made sure the Celebrations were done in a way that did not harm the environment. The human waste was sent to government treatment plants. Kitchen and food waste was transformed into compost by adding EM. After breaking down the 50 tons of food waste into two and a half tons of natural compost, this EM-treated compost was sent to agricultural land owned by the Ashram.

Manure, which the is normally used for fertilizer, costs the Ashram five rupees a kilo. To make compost with EM only costs 50 paise a kilo. Thus, the compost from the celebration saved the Ashram four and a half rupees per kilo. “Everything Amma touches blossoms into good,” said the grinning brahmachari who’d been put in charge of waste management.