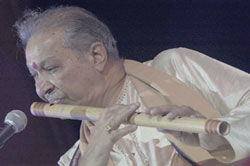 Pandit Hariprasad Chaurasia has dedicated his entire life to the beguiling music of the bansuri—Lord Krishna’s flute. In his hands, the instrument attains an astonishing range of four and a half octaves.

Panditji has established the bansuri as a concert instrument and has experimented in fusions with jazz musicians, such as guitarist John McLaughlin. As a result, he is the recipient of numerous awards. He is also the only flautist to have won India’s prestigious Padma Vibhushan Award.

Panditji has recorded more than 300 albums. He also established and runs a school in Mumbai that follows India’s gurukula tradition, wherein a master provides his disciples with free board, lodging and instruction.

At the time of Amritavarsham50, Chaurasia was the artistic director of the World Music Department at the Rotterdam Music Conservatory in the Netherlands, and was dividing his time between his Mumbai school, the Rotterdam Academy and performing throughout the world.