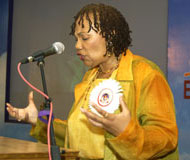 The daughter of Rev. Dr. Martin Luther King, Jr, Ms. Yolanda King is one of America’s most inspiring spokespersons for human rights. She addresses audiences all over America, calling people to understand the power of unconditional love in the non-violent battle against hatred and division. She is a renowned actress, and producer with her own production company who dedicates her art to promulgating her father’s message of social change.

Ms. King’s formative years were steeped in the experiences of her father’s leadership in the Civil Rights Movements. Even as a child, she shaped and expressed these real life dramas in her art. Later as a graduate and visiting professor in theatre studies, she perfected her message, the essence being that while we must challenge the forces that deny human rights we must also affect the hearts and minds of both the abusers and the abused.

For Ms. King, this power to transform the individual and society lies in the realm of art. She has received numerous awards and citations—recently one of her film roles was considered for an Academy Award, and she was also named to the Outstanding Young Women of America Award. She was the founder and director of the King Center’s Cultural Affairs Programme and now dedicates her time to speaking and performing in the USA and Europe, and producing film and theatre projects from her home in California.