Dhanashree Vinay Renge of Mt. Carmel Girls' School in Nagpur receives a hug from Amma and an award from the President

Upon the conclusion of his address to the more than 100,000 youth assembled in the Amritavarsham50 stadium, Indian President Dr. A.P.J. Abdul Kalam handed awards to the authors of the top essays in the Celebration’s essay-writing competition.

More than 150,000 students from 1,200 schools throughout India participated in the competition, writing on the theme: “Spirituality, Human Values & The Environment.”

They were vying for cash prizes totaling Rs. 550,000. The competition was held at various centres throughout India on 20 July 2003.

In the presence of Amma, the President handed awards to five of the six top essay writers. However, the second-prize winner in the junior category—Indrani Dasgupta—asked if it would be okay for Hindi film star Jackie Shroff to hand over her award. Mr. Shroff was one of a handful of celebrities onstage alongside the President to make short inspirational speeches to the youth as well. 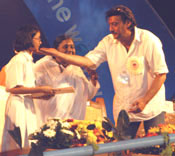 This entry was posted in Awards, Cultural, Essay. Bookmark the permalink.