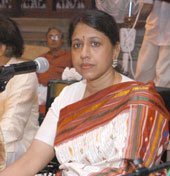 Mrs. Subramaniam is a favourites of both critics and audiences. Her exquisite voice, with its wide vocal range and versatility has put her in a unique place amongst performing musicians. Beside her reputation as one of India’s leading playback film singers, she is well known for accepting difficult “assignments” and singing in diverse genres.

She says she loves working with children and is a sincere advocate of charitable causes.

Initially, Mrs. Subramaniam’s exemplary voice took her on international concert tours to the UK, the US, the Middle East, the West Indies, South Africa and Australia. Her fairytale rise to stardom continued with the beginning of a career in films under the legendary Lata Mangeshkar.

Since her marriage in 1999 to the violin virtuoso Dr. L. Subramaniam, Mrs. Subramaniam has been working with him on new “fusion” projects and exploring new avenues in music. She is a soloist on his latest Global Fusion album. She recently won the “best singer” award at Stardust Millennium 2000.